Hungry Birds is a fast-paced, realistic simulation where players fly through a forest and try to eat as many moths as possible (by touching them on a touch screen). There are dark moths and light moths and they appear on the trees.

To keep the game simple, players follow a prescribed flight path through the forest—there are no flight controls. Players focus exclusively on locating and eating moths. The point of the game is how their target choices change in a changing environment.

At first the trees are white and it is easy to see the dark moths. When the trees turn dark (halfway throughout the game), it becomes easier to see the white moths. Competition to get a high score forces the players to eat the ones that are easiest to see.

When  players see how they ate a disproportionate number of light or dark moths depending on the color of the trees, they understand how pollution affects bird predation and how that would change the mix of light and dark colored moths over time in the forest.

How Many  Moths are in the Forest?

The forest is made up of 16 successive “blocks.” There are 40 places in each block where moths can appear, yielding 640 total possible positions (16 x 40).

At the beginning of each game, half of those positions are chosen randomly and moths are located at 320 sites, 50% dark moths, 50% light moths (160 of each). 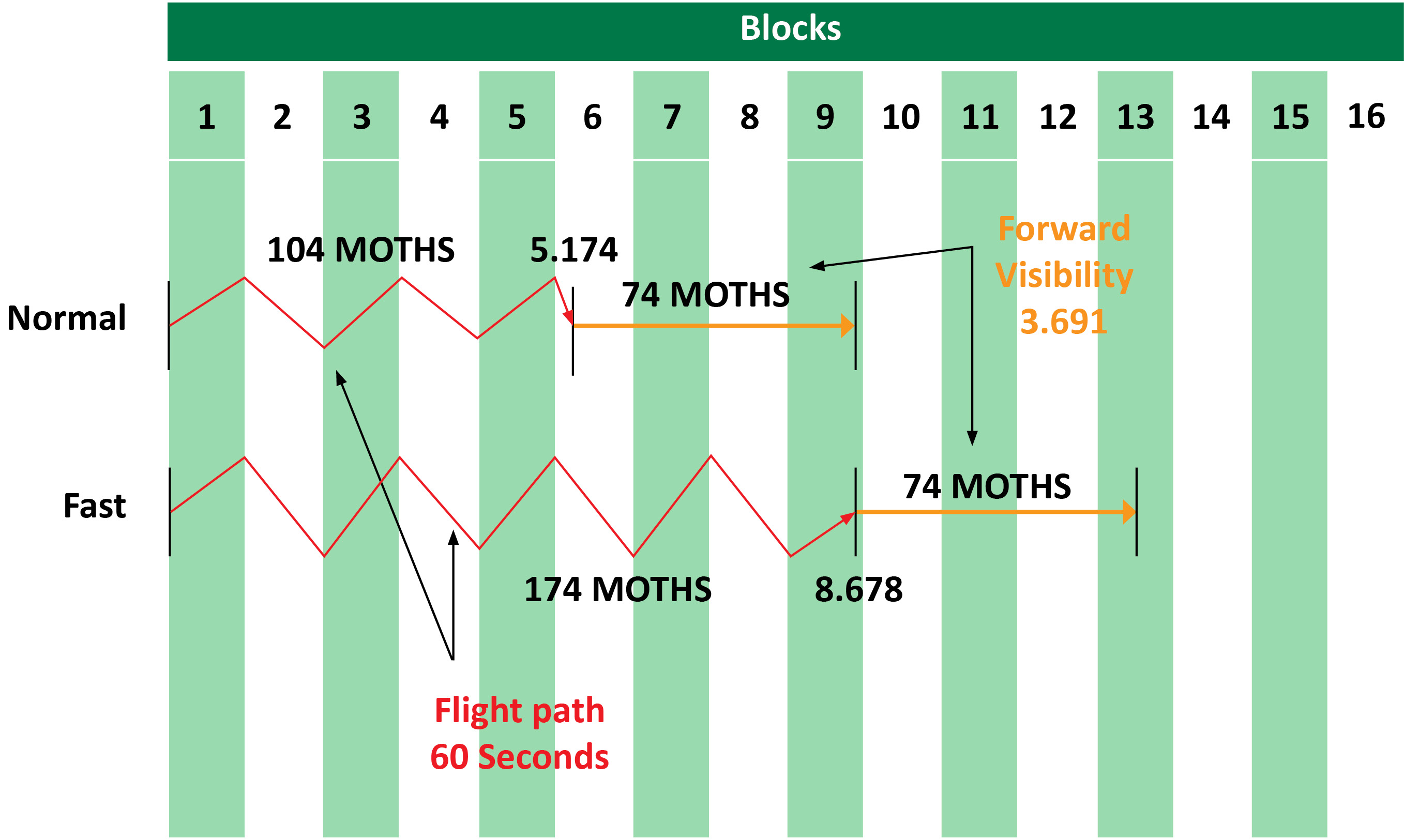 Are There a Different Number of Moths in the Normal versus Fast Setting?

Yes and No. There are 320 moths in the whole forest in all cases (distributed throughout the 16 blocks), but…when on the Fast setting, players penetrate deeper into the forest (the timeframe remains 60 seconds, so by going faster they go farther) and therefore come across more moths than players at Normal speed.

Players do not come across all moths at either speed, since neither track (Normal or Fast) goes through all 16 blocks.

[Technical Note: In addition to  moths “passed,” players have visibility into approximately 3.6 future “blocks” at any given point. Therefore, the total moths “seen” during game play is the perfect scores above plus an average of 74 (3.6 x 20). At the moment the game ends (thus defining the number of moths “passed”) it is no longer possible to touch “future” moths, but it is possible for a player to touch more future moths than passed by him/her in any given block. Therefore, the “perfect scores” above are lower boundaries (and not exact), with upper boundaries no greater than +74.] 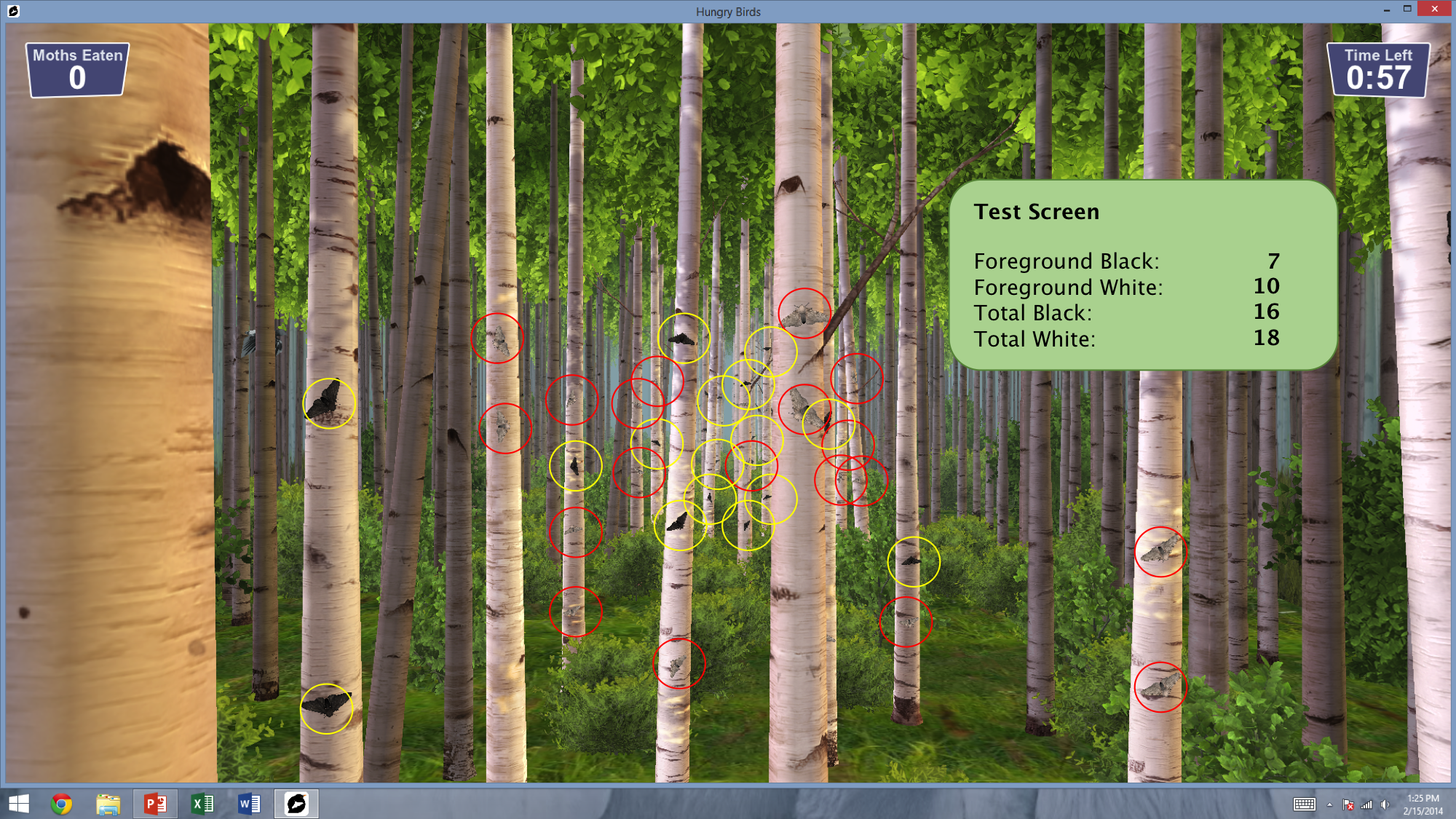 Moths in the far distance are in future blocks, but can still be touched and eaten (though the farther away the more pixel-perfect the touch must be).

NOTE ON GAME SPEED: On the Main version, the host venue has several options when setting up the game. One choice is the speed of the game, Normal or Fast. The default setting is Normal and that is the one we recommend be used in a museum since young kids will be playing the game. (There are no such options on the iPad version – speed is always Fast.)

In Two Player Mode do the Two Players See the Same Forest?

Yes. At the start of any session (one player or two), the forest is created according to the rules above, and both players follow an identical flight path through it (speed is the same for both players since it is a global setting in Options).

How are the Moths Positioned on the Trees?

Each block contains a set number of trees and places where moths can be located. When the game starts it randomly fills up half the total spots with moths, 50% light/50% dark. As for each individual moth, they are placed (oriented) on the trees randomly, 0-360º.

Are All the Moths the Same Size?

Yes. All moths are the same relative size, their absolute size changes as they get nearer in the game (in a 3D sense), but this is true of all moths. On a relative scale they are about 85% the size of the tree they sit on. This is a bit bigger than in real life, but then birds have much better eyesight than we do.

At the beginning of the game the trees in the forest are white or light colored. Half way through the game, pollution is introduced and the trees get darker (making it easier to see the light colored moths). This transition is layered on top of the forest created by the rules above. In other words, the “dark” forest is simply a continuation of the “light” forest but treated to make the trees appear darker. No change is made to the moths, physically or numerically.

How Fast are Players Flying Through the Forest?

Call us to order Hungry Birds!